Changes to pre-charge bail and the process of being released under investigation (RUI) came into force on the 28th October 2022 following implementation of schedule 4 of the Police, Crime, Sentencing and Courts Act 2022.

What is pre-charge bail?

Pre-charge bail manages suspects who have been arrested on suspicion of an offence but where the police need more time to complete their investigation before a charging decision can be made. It requires the suspect to ‘answer bail’ by returning to the police station at a later date where they will either be informed of the decision or given an update on the progress of the investigation. Pre-charge bail may be accompanied by conditions such as not to contact the complainant and witnesses or not to enter a specified area. 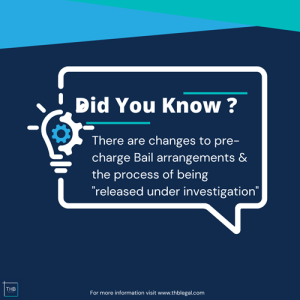 What was the previous arrangement?

In 2017 the government legislated through the Police and Crime Act 2017 to address concerns that individuals were being kept on pre-charge bail for long periods of time sometimes with strict conditions. These changes introduced a presumption against the use of pre-charge bail unless it was ‘necessary and proportionate’. Following these changes, the number of suspects subject to pre-charge bail decreased and suspects were instead being RUI. Unlike pre-charge bail, RUI does not require the suspect to return to the police station on any set date and does not come attached with conditions.

Why has it changed?

The changes implemented by the 2017 Act raised concerns that bail was not being used when appropriate and necessary to prevent individuals from committing further offences or interfering with victims and witnesses. The act also impacted on the accused party as suspects under investigation were being left in legal limbo with no update on their investigation for an unlimited time. We have seen this first hand with clients being under investigation for upwards of two years. Due to the concerns raised on the impact the procedure was having on police, victims and those under investigation the government launched a consultation on pre-charge bail in February 2020.

The Police, Crime, Sentencing and Courts Act 2022 has removed the presumption against pre-charge bail and encourages the police to use pre-charge bail in every case where it is necessary and proportionate. When deciding whether to impose pre-charge bail the police must consider the factors set out in statute, 30A(1B); this makes specific reference to the need to prevent offending, safeguard victims and manage risks to the public. The police now have a duty to ensure victims get a say in conditions attached to pre-charge bail to ensure they feel confident they are being safeguarded. These reforms are known as ‘Kays Law’ in memory of Kay Richardson who lost her life at the hands of her ex-partner whilst he was RUI, rather than bailed.

How long can I be on pre-charge bail for?

Under the new arrangement, custody officers can now authorise the first period of pre-charge bail to a period of three months in standard police cases. It is hoped that this extension to 3 months will allow officers time to conduct and conclude their investigation within the first period of bail in the majority of cases. Further extensions to six months now require approval from an inspector and a superintendent or above can authorise an extension to nine months. Judicial approval will be required if bail is sought to beyond 9 months.

What will happen to RUI?

By removing the presumption against pre-charge bail it is expected that there will be a decrease in the number of suspects subject to the RUI process. This may be beneficial to suspects as although they will be required to return to the police station and may have to abide by conditions, they will receive updates and an outcome should be reached sooner. RUI does not have any statutory timescales and it is seen that officers often fail to provide regular updates on their investigation. RUI will still be used when appropriate, such as when bail is not considered necessary and proportionate and no further action is not appropriate at that time.

If you have been arrested, been invited to attend an interview or was unrepresented at the interview. Ask for THB solicitors at the police station or contact us on 01268 792994 or 01245 493959 for representation or advice